This post will unfortunately be without images, maybe tonight I will take some and come back and update it with them. (as it appears I did)

Last night as I worked on the "pretty dress" as detailed in the last post I discovered that I was having one of those nights (this discovery came as I pulled the zip bit off the bottom - the sealed bottom- of the zip teeth, thats right I was being so heavy handed I literally pulled the zip apart. Luckly it has been repaired). In any case one "those nights" it is often best I have found NOT to work on projects, however I did want to get some work done with my sewing projects. I was not in a tracing mood, so I decided I must be in a cleaning mood - and so I cleaned. 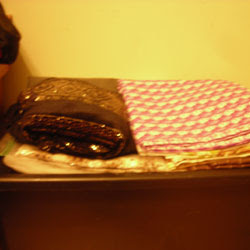 I sorted out my cottons, my notions, buttons and trims, needles and pins, closures and tools now all sit neatly in their home. Then I moved onto the Black box of cloth mountain, which now looks a little less mountainous, being almost flat to the top of the box.

In doing this I discovered a few materials I had not remembered having. (here is where I really need to take pictures and update, but will see if I get around to it tonight). 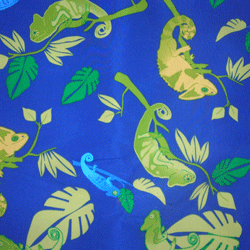 I have a chameleon based "Hawaiian" print in blue, green and yellow. The material is some sort of quick dry board short material, though I think I remember planning to make a dress out of it. I think there is either 3m or 5m (which is what i normally buy in) and I think it is 150cm bolt. I am thinking it needs to be a summer beach dress (why waste the quick dry quality) but otherwise I am at a loss design wise. Estimated age 1.5 years. 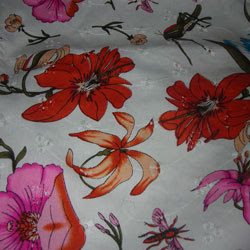 I have what has been called the "bug material" which is a white eyelet with blue and orange and pink flowers printed on it, as well as green bugs - grasshoppers I think. I have at least 5m of this one and I know the dress I want to make out of it, but I don't have the colour to line it with (thinking orange but could go to other colours I guess) and under the rules of stash bust I don't know if I am allowed to buy it. I am now considering the dying of some white or it may have to wait till after November to be done. Estimated age 2 years.

I have white sateen, which was to be a skirt to wear with an outfit ages ago but I never got round to it and now don't know that I would use a white sateen skirt. I think there is about 1.5m of it maybe 2 if I am lucky on a 150cm bolt, maybe a onsie would be cute. Estimated age 1 year. (Photo not included as I am sure we all know what white looks like) 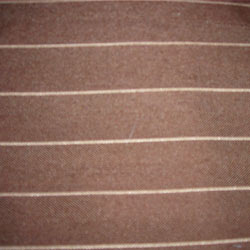 I have a brown with more mustard brown pin stripes, I remember getting it to make pants as a pirate but the pants when made up were way to small - and now I have about 1m of 150cm bolt left of it just hanging around, it could be shorts, or a vest but there isn't much of it to play with. Estimated age 2.5-3 years. 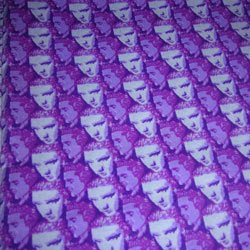 I have the purple Elvis material, which is abstractly striped with Elvis' head. I have 4m and I know what I want to make out of it, it is even all traced, but I have some issues in that I need to line up the stripes I am not quite sure how I go about doing that. It requires some thought. Estimated age 9mths.

I also have 4 yellow buttons with "I'm a flirt" written on them in purple (talk about impulse buy) lord only knows what I will do with those.

There was many many more bits of fabric that I had forgotten about, Stash busting is turning into an adventure of discovery.
Posted by Angelic Cow at 11:41 AM