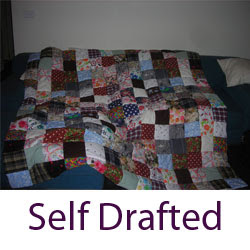 I am finally done!! It took me at least a year but it’s done! It looks awesome too.

I slept under it the other night. Iit was quite cold in the morning and a little chilly (Even though I used the thick wadding) so it has been named a mid-season quilt. It was not as cold this morning and it was very much fine to sleep under, especially with the body heat of my cat on top of me.

The last parts were very difficult. I cut the pieces all out; then sewed them together, then sewed the top to the bottom and turned it inside out with the wadding in the middle. Then I sewed down each line. There were 13 lines in total each way.

The first few lines were good as they were close to the edge but the middle ones kept slipping and such. I ended up laying it all out and then pinning all layers together to stop it from slipping and once I did that it was easier. It was a good 15 minutes per row and this got more as I got to the centre. With small sew and then adjusting the quilt. I was sorry that I didn’t have the quilting machine because the quilt had to bunch up in that little crevice in the machine so when I did the middle one there was ½ a quilt in there and it was crazy. After ½ an hour of sewing I was puffed from dragging the quilt through the machine.

Looks great on my bed! 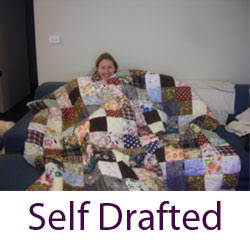 MMM Snuggly.
Posted by Angelic Cow at 9:59 AM