So I just realised I forget to post this one up .... after all that build up lol

Before I start I have been looking at my stats and seeing that there appears to be people all over the world you read this.  Weird feeling.  Out of interest please leave a comment about who you are and where you are from it would be nice to know who's connecting to this.

Anyway without further ado, and I believe there should be a post for each part so I won't go into to much detail in this one just an overview.  If I have missed any pieces I will go back and fill them in later.

The dress was a raging success though I am still on the hunt for a snood.  Below are some pics because I know when I am looking at blogs that's the main thing I am interested in anyway :)  Enjoy and remember leave a comment I would love to know what you think of my work. 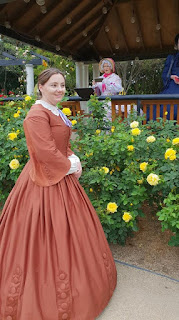 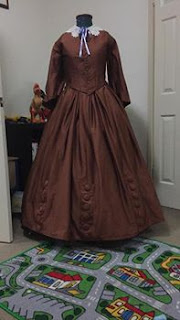 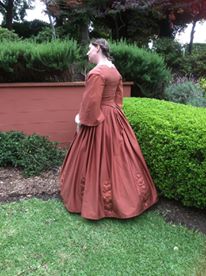 Posted by Angelic Cow at 6:23 PM No comments:

Ageless Patterns had a sale in April to celebrate their  birthday and I couldn't resist.

My original plan was to make the 1389 for a tram anniversary in  December and the others were just to make postage viable and take advantage of the sale.  However when a steam train ride to Kiama appeared on my Facebook feed and a friend in the Historical Picnic Society decided to organise the troops the 1912 jumped the queue.

Planning Process
This pattern says (and Ageless even checked there original for me) it is a 40" bust and a 27.5" waist.  I made up a trial knowing that I would not ever corset down to a 27.5 at the moment expecting to resize.  In the end it actually fit my 40"/30" amazingly well with zero alterations.  I can't explain this but don't look a gift horse in the mouth.

Ageless patterns do take more planning than many others due to the lack of instructions.  Ageless do not pretend to be anything more than a reproducer of the original pattern with original instructions.  Thus it is important to remember going into this that no one will hold your hand, "finish in the usual way" was a very valid instruction for the Victorian and Edwardian times when sewing was much more widespread and people just knew how to do those things.  Given that i rarely actually follow instructions this isn't a huge hindrance to me but I understand it may be to others.

These instructions seemed even more vague than usual, possibly as the original is in french and Ageless have translated as best they can.  Both English and French are included so if you do speak both perhaps it would be easier for you.  The biggest issue I had was was the closure none of those instructions made any sense nor did the pattern pieces that came intuitively give you a closure point.  Instructions say that bodice closes at center back, and that the first few buttons on the front are functional but with no center back seam on the skirt there was no place for the waist band to open.  I decided after consulting many online groups to add a center back seam and go from there.  This has worked though I can't say I am a fan of the hook and eye closure and will be de-historifying it with a button covered zip in the near future.

Another point to be aware of is that the entire over bodice is one huge pattern piece with some deceptively simple shaping techniques for the sleeves and the side seam. 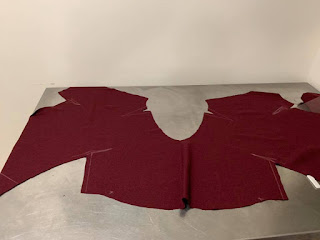 In short ease the dart in the sleeve part, sew small darts into the underarm/underbust/side seam area.  Line up sleeve ends and side seam bottom pull straight and sew one continuous seam. 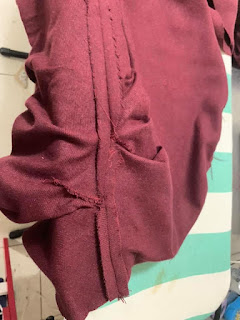 Took some fiddling but this was worked out in trial stages.  Not doing this will cause the arm to twist oddly. 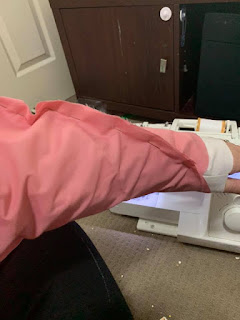 Fabric Choice:
Knowing that this dress would be for winter - specifically for this train trip I wanted a warmer fabric than the suggested taffeta.  After much deliberation I decided that despite my wool allergy a wool or wool like would be best and due to the bodice piece issue a non plaid.  Any pattern was going to need to be small and able to conform to biases.  I thought and fiddled and searched until I happened upon a beautiful marle Oxblood mostly acrylic (yay for less allergins) from Pitt Trading.  I accented with tulle from stash, lace and velveteen from spotlight.  Lining is left over white cotton and white linen/cotton. 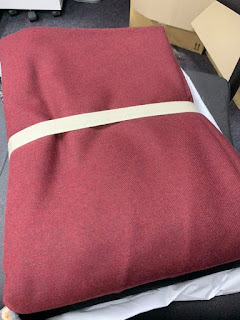 Buttons came from a shop in newtown that sells huge amounts of buttons in all shapes sizes and colours.  They are a black plastic with a little shine to them.


The Making:
This pattern (by fluke of fitting me) came together perfectly once I had worked out the few small issues - being the closure, the sleeves twisting and that I misinterpreted a pattern marking and cut off some of the left side skirt (yeah don't do that  - you will have to add it back later).

The fabrics were of little issue EXCEPT the tulle. It has gone straight onto the banned list and I will avoid it now like a creeper in a club.  I have to thank Angela Clayton for the inspiration to overdo the dicky adding both lace and pleated tulle.  Undeniably it looks fantastic, but it was a nightmare to control and still is.


So without further ado here is the pictures of the finished dress beautifully backdropped by vintage trains. 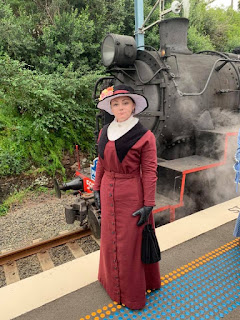 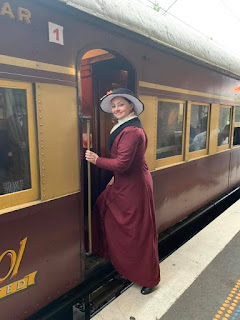 As a side note the hat was also made - I will eventually do a post on that too - another credit to Angela Clayton.
Posted by Angelic Cow at 3:59 PM No comments: