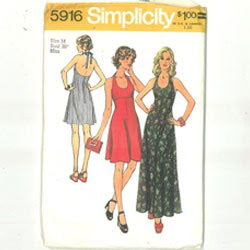 As previously pointed out I bought this pattern on etsy from Historically Patterns, who I can highly recommend for their fast fuss free service as well as the awesomely cute button they included for me free of charge.

To be honest this pattern was bought more as an afterthought, it happened to be in my size, I happened to by buying a few patterns from this seller that I adored, and well when buying international Ange and I like to take advantage of the combined postage discount - and so on the whim that it "could" make an ok dress for spring and I would not need to resize it I bought the pattern.

I continued with my sewing life as if nothing was different, the nautical onsie outfit continued uninterrupted and I finally got to the point where I was cutting out the full circle skirt. It was here I discovered just what a dirty fabric hoarder I was. After cutting out the skirt which is in every respect a great material sucker - I was left with several meters still to be used, and in stash busting time too. I couldn't put it back into the stash - that would go against the principle of stash busting. To return such a distinctive material could be condemning it to another 12 to 24 months of life as a flat lifeless sheet.

The patterns from Historically Patterns arrived only a few days before and I was somehow drawn to the halter maxi, it looked simple enough, only a few pieces. I had all the fabric required, sure that I could squeeze it out of the remaining meters (probably 2.5-3 but likely more like 2.5). I was also pretty sure I could pump it out in no time flat.

I started at 8:30 (the start of NCIS on a Friday night) I stopped at about 1am and had only left the hem, and the hand stitching of the lining to the internal bodice. Also I had left the frenching (I think) of the two side seams. Usually I don't bother with finishing my internals, however weeks of checking out blog world has made me jealous of the perfectly finished garments made by those in internet land, as well as the perfect neatness of Ange's work and so given the ease of the pattern I decided that even if only this once I would make a dress that was perfect too.

The following morning (and I use that term loosely) I picked it up again and within the hour I had completed the dress.

The pattern pieces fit together well, the design is somewhat flattering and all in all I must say I am happy with how it turned out. I then was able to wear my new creation to my Husbands 29th Birthday BBQ in hopes of getting some good photos for you peeps in networld. Now to the details of the photos that follow.

I have a nasty habit, photo-wise. It is more like an unexplainable phenomenon. I am physically incapable of taking a good photo. I pull stupid faces, end up with triple or quadruple chins that appear out of nowhere, slouch myself into looking fatter than I am, and generally screw the photo up somehow. For these the issues include the above and also that I forgot to take them until the END of the day, so the cotton dress had gone a bit creasy. Further it could probably have done with a was before (to soften out the starch in the cotton) but by the time the photos were taken it most definitely needed a was, so if you can notice the slight orange mark on the front, it is dip and yes I am a grot. 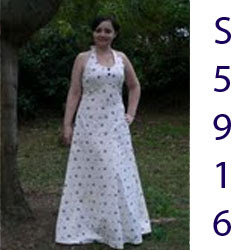 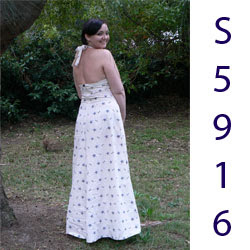