The "Pretty Dress" a History 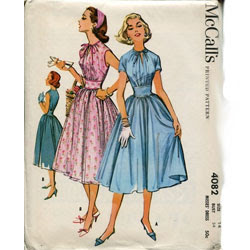 Once upon a time I was browsing the wonderful vintage pattern wares on Etsy and I found this exceptionally pretty pattern.

After deliberation with my other sewing half Ange it was decided that it must be bought and owned by us. After further deliberation I won out to be the owner of the pattern, Ange it would seem would need to be happy with simply owning a finished product at some point. We dubbed this pattern "the Pretty Dress" as no one in any land could deny that this dress is indeed pretty, and it's name has stuck.

I should point out here that I had MANY MANY patterns sitting unmade, and this project remained my top priority only long enough for me to buy the materials for it, a nice soft white bastite, and lemon yellow bias tap for the accented trim.

I hunted out on etsy and purchased a petticoat pattern as the bastite would require it, for this I bought a lemon yellow cotton. 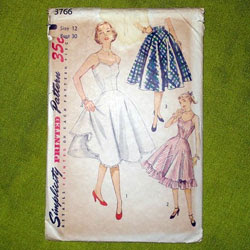 At some point I started the petticoat, which I will write about in more detail in a further post - but basically it got to the so close to finished I could smell it when the "issues" with it made me toss it to the side in despair, to fix it that mystical "one day" when all my failures at sewing are fixed/finished. From then on the entire "pretty dress" project sat untouched by me. The materials for it just another precipice on cloth mountain

Ange on the other hand was obviously much more infatuated with this pattern than I was and diligently set to tracing and creating this dress. A benefit for me because I would not need to trace it and could just use her copies. Again, I borrowed the tracings - and they sat together with the original for months gathering dust. Many projects came and went and yet "the pretty dress" stayed unmoved from its foundations.

With the introduction of the great stash bust this month, I have been forced to look to the projects in various states of completion. This particular pattern was holding up about 5m of material in the stash and honestly did not look to hard to complete - and so last Monday on my day of holidays I set to work.

This dress is almost finished, the petticoat almost corrected - and hopefully with this post going up I will find the gumption tonight to make those final touches and be able to post the whole process and results by this weekend.

Also outstanding - the Onsie 50's beach outfit (status complete post to come after I wear it to the 50's fair) and the 40's workwear project (status in limbo, I will have to get back to this soon)
Posted by Angelic Cow at 2:39 PM