In an effort to keep up the habit of posting on here I am going to be doing a series of "Old Projects" in amongst the new ones. I have actually finished a new one - being my onsie, and am almost finished the skirt to match (tonight) but I am camera lazy so you will have to wait till next week to hear about the elation that is the one step button hole.

For Now though I entertain you with what we have come to call the girl Dress - for obvious reasons. 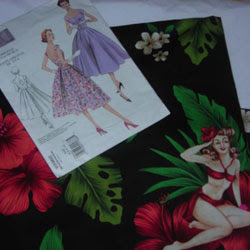 This was actually my first "vintage" experience, and I use the term loosely as it is a vogue vintage reprint (V2960) which is in my opinion a brilliant and almost flawless pattern. Several incarnations have been made and all of them I have seen have flattered the wearer.

Ange has also made one and I would have posted a cool pic of her in it, but alas my husband has let his flickr account relapse so that will have to come later. As for pics of me in the dress, again I must admit a lacking, I have come to discover that despite plans to get photos of our outfits, Ange and I are terrible at follow-through, as such Mavis will model much of these. When I do get pics of the dresses actually on me - I will then update with new pics. I will I swear organise a photo shoot.

Anyway I was supposed to be talking about V2960 right. Well I didn't know if this dress was going to work, I had bought the last of the bolt and had about 2.6m of this material (which is undoubtedly the most awesome material I have ever owned) but luckly for me vogue seemed to have over quoted on the yardage. It did however mean that the girls would have to fall as and where they would. Had I more material to begin with I would have tried to avoid the two knee on the boob thing that is there. 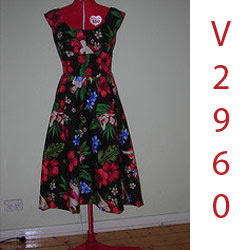 Issues I had included my distinct hatred of button holes (which I have only JUST overcome - this dress is about 2 years old I believe). For years of costume making I avoided button holes like the plague. I invented many ways in which I could NOT do buttonholes, including but not limited to lace ups, zips, button hole elastic and in this instance snap studs.

This has caused one small issue - I am a large busted person, and the dress probably should have been re-sized to have more room in the chestal area for me. However I was as always rushing, took on a she will be right attitude that is so typical to my Aussie brethren and charged forward full steam. the outcome - I kind of need to pin between the top two buttons otherwise the top one pops open willy nilly - not very modest.

Regardless though I love this dress, the neckline is daring but not out there, the shape is slimming in all the right places and I highly recommend it to anyone and everyone. Realistically if the only problem I have with the design is that I didn't fit it properly I can't blame vogue for that.
Posted by Angelic Cow at 10:25 AM