This is a dress that I made when I first set out on vintage sewing. I believe it was the 2nd vintage vogue pattern I attempted. The original pattern reminded me strongly of Grace Kelly and Audrey Hepburn. It has an inbuilt elegance about it that I found captivating (as I always do). I however do not possess the grace of Audrey Hepburn or the elegance of Grace Kelly – more closely resembling a bull in a buffalo stampede.
The pattern seemed easy enough to follow, and in truth it came out very quickly and easily. The simple lines of the 1950’s style does tend to make a dress within a day that is in no way compromising on finishes for speed. I chose to make it however out of an orange floral cotton that I had picked up for I believe about $3/m at spotlight on sale. 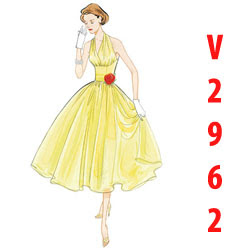 When I bought the cotton I had envisioned a 1960’s shift style dress and in truth the material did share some resemblance to some 1970’s kitchen curtains. I however have always had a love of the ridiculous and what some would call ugly. I find things fascinating that are not what you would call traditionally pretty, so I bought up 5 or so meters of the stuff knowing that one day I would find the right thing to make out of it. Plus I love yellow and this orange/goldenrod was close enough to qualify.

Now what made me match the elegant vintage vogue dress to the 70’s chic curtain fabric is long beyond me. Something must have made me connect the two and likely it had as much logic involved in the decision as a Salvador Dali painting, and yet somehow in the finished version it seemed to work. I have had many compliments on this dress which by all reason should be an atrocity and an insult to the eyes of every living creature. I have no idea why it works just that it does and that I really do love it. 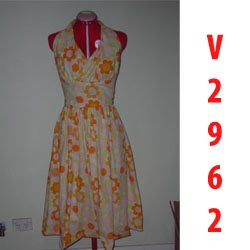 I did have to make some small changes to the dress to make it work for me – and Ange incorporated those changes when she made her version (visible in our avatar picture on the side bar). The first was to change the back from standard buttons to the elastic button loop stuff. The machine I had at the time apparently had a one-step button hole but I’d be damned if I could figure it out. The elastic loop stuff was just easier – and since I was using non standard buttons (they are little orange flowers) the elastic is a god send.

Having said that the 2nd change I had to make was to move the button row. It actually goes at an odd angle to the edge of the dress, this is because the sizing on the pattern (and all standard patterns of modern design for that matter) is odd for my body shape. I am very front heavy but my back is teeny tiny by comparison. The buttons did make this alteration very easy to work with.

Lastly and the very visible in the picture is to change the neck line. This pattern has a very heafty amount of fabric in the gathering of the bust line. I think in the light weight floaty fabrics you would generally use this would not be a problem but in printed poplin it was. Basically as I stated above I have an impressive bust measurement that basically sits out in front and not in back – all that gathering was making me look like I was all boob.

To fix the issue I added in some small pleating to sew back the neckline side of the halter. It seemed to fix the issue nicely AND had the added bonus of looking like a feature piece of the dress.

All round I would totally recommend this pattern to anyone – it was easy to make, I can ‘t say that the instructions were easy to follow as I don’t tend to look at instructions but from memory they would be no worse or better than any standard vogue instruction page. The finished dress is fun flirty and summery, it can be adapted for both formal evening style (there is even a full length option) or for casual wear. And the biggest benefit is that being a reproduction pattern it is easily available from any vogue pattern outlet – and comes in multisize.
Posted by Angelic Cow at 12:24 PM No comments:

The Small Stuff Blitzkrieg and the Pheasant Plucker Skirt

I know I am horrible at keeping this updated, to be honest I have also been nigh on horrible at keeping up sewing. I have had job issues, personal issues and gotten in a rut. Now though I think I am out having several projects to bring you up to speed on and also this the newest of the Angelic Cow Challenges, which I am calling the “small stuff blitzkrieg”.

So first of all where it has come from. I went through some patterns that my mother had stored away whilst I was spending much quality time with her. To be honest this is because I was working in the same area but it was nice non the less. So I found in amongst the plethora of bad 80’s fashion and subdued yet dowdy 90’s horrors a few patterns worth maybe having a go at. Two of them were simple skirts which I grabbed owing to having the “Pheasant Plucker” fabric I had bought on a whim of ebay sitting at home.

The Pheasant Plucker fabric is indeed a weird lime tinged/brown/Gold mixture picturing pheasants. When I bought it I had no idea how big the pheasants were, apparently quite big would have been the answer to that question. This left me with no choice but a simple a-line skirt for which I had no patterns. That is until I raided mothers stash.

And so despite issues such as the majority of pattern pieces missing in both skirt patterns I managed to piece the two patterns together to come up with something highly reminiscent of one of the pictures on the pattern fronts. Hence within 2 hours of arsing around the Pheasant Plucker skirt was sewn into being.

(side note I call it the pheasant plucker material because it is funnier than just pheasant skirt. It’s an old tongue twister that makes you say naughty words)

In any case the point being that now I like skirts. The second thing that brought on this idea (remembering that small things can come together start to finish in around an hour) is that Stash mountain (which is again looking very unnervingly disorganised and has done since I moved in January) is getting a little out of hand. A lot of the stuff in stash mountain is unfortunately there due to it being off cuts to small to “use” and too big to throw. I figure with the right kind of vigour I could desecrate the peak of the mountain and make me some funky skirts, shorts, and tops.

So the answer came to me Angelic Cow will be doing their first ever Small Stuff Blitzkrieg the rules of which are.

1. Collect all fabric under 1.5m from stash mountain and stash molehill respectively
2. Collect any patterns for small things (shirts, shorts, skirts) that require less than 1.5m to make
3. Start at 7pm end whenever we feel like it on a Friday night and see how many items we can make between us.

The date is set for tonight and I think we will have an awesome pasta dish to put forth the energy needed to really tackle this head on. I will be sorting out my first two points as soon as I get home (oh and after I upload a pheasant plucker photo for you to enjoy.)
Posted by Angelic Cow at 12:31 PM No comments: