The Most Epic of Major Project for 2017

So as I mentioned before I am going to be working on a major project this year.  A friend of mine joined an historical picnic society and has been working on a gown with pocket panniers – You know the ones where you turn sideways to fit through a door.  Anyway she has been posting pictures of her work in progress and working very hard on getting all the trims right and making it look fantastic and doing an amazing job given she is pretty much learning as she goes on a lot of the techniques.  Well Mel has inspired me to go back to my roots in sewing and make an epic costume.  Inspired also by a new friend who works in costume design and some of her amazingly professional work I have decided to revisit the Victorian era and create a costume from what I call skin up.

So what do I mean by “skin up”.  This costume is going to include, underwear, corset, bustle, petticoat, underskirt, Polonaise and hat.  The entire ensemble from the skin to what you see.  Some of this will be able to be made using stuff I have, the patterns are all taken care of, either I own them or in the case of the corset my costuming friend is going to lend a hand and help me draft up to my exact measurements.   So below is the epic nature of the vision I have with a deadline of July as I want to have a historical picnic for my birthday. 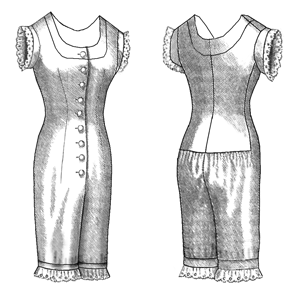 Owing to the hot Australian climate (even our cold is not really that cold by comparison to many other places) I have decided to make these in a lighter fabric.  Perhaps a lawn or a voile.  I will need to reinforce the button holes though, and I am undecided on whether I use the machines one step button holer or make bound button holes.  I will trim the bottom of the legs and the neckline with some cotton lace just to add a little bit of pretty.  Technically this is the first piece I need to create, realistically there is a UFO that may be finished first.  I bought this pattern when I made a whole bunch of Victorian stuff years ago but never got round to making it. 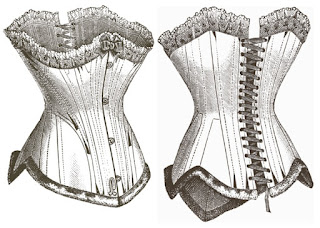 As I mentioned a friend is going to help me with a personalised pattern for this.  For me this is important as every Victorian corset pattern I can find goes up to a DD bust at best and I am currently an F.  I am not entirely certain what fabric will be required but I assume I should be able to make it with a homespun backing, canvas internals with metal boning and taffeta as the outer layer of fabric.  I am hoping since I already have the canvas and taffeta.  As a side note the taffeta is literally the oldest piece in stash mountain dating from I believe 2004/5.  The canvas I bought when I made the Elizabethan ball gown. 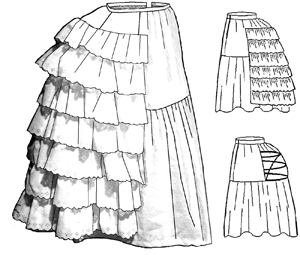 Again this is a pattern I have had for a while, I even bought the wires precut that TV sell to make this project easier.  I never did add all the ruffles at the back but for a while there I had a bustle.  My original plan was to dig it out and finish the ruffle bit but when I took it out the thing had gone a bit mouldy.  Deciding that this was actually pretty gross I harvested my boning and threw the rest in the bin.  In the remake I plan on using homespun as it has a good weight to support the wire cage but won’t be too heavy.  From memory the cage section may need to be reinforced and if this is the case I will use an inner layer of canvas and back that again with homespun.  I am going to do all the ruffles on it (bring on the ruffle foot that I will need to buy but I really don’t want to hand gather all of the stuff that will need to be gathered in this project). 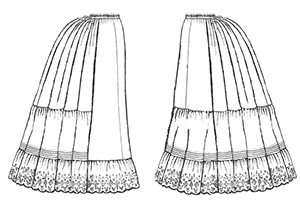 So remember that petticoat that I had in the post about my UFO’s.  Yeah I am going to make use of it.  I bought all the stuff to make it for my friend when I made a bunch of Victorian stuff back in I think 2008/9.  I saw the dolphin lace that is on the bottom and as she loves dolphins I thought yeah I will make her that.  But in true Hef style I bit of a lot and had to chew fast (6 female Victorian costumes and 3 male).  This Petticoat along with one of the male coats and the combination underwear  got shelved in preference of having the externals finalised.  Well Now its time to bring it all back out.  Whilst as I said above the underwear should be first this is probably going to be the first finished because well its very much done, over half way I would say.  So the petticoat won’t fit in with the all white unmentionables but what is life without whimsy.
< 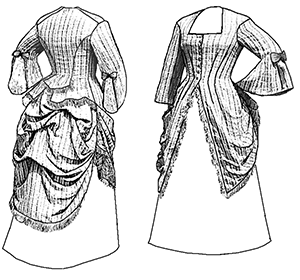 I have made this pattern before for a friend in the great Victorian sewing extravaganza.  It is a very pretty pattern that is surprisingly easy to do.  I will poof it better for this one than in the picture provided as I am after a more early bustle look where as my friends was more late bustle.  I am thinking it will be a royal to navy blue though the exact type of material is still being considered, a lot will have  to do with costs.  Depending on the shade of blue I will trim with either red or maroon and white.  I want to have a double sided pleat around the base and neckline all the way around the bottom in white and a red strip running up the centre of that trim.  Whether I can get that done or not is another question.  I am going to also include a pleated undersleeve on the cuffs and I will use a silver button to finish it all off. 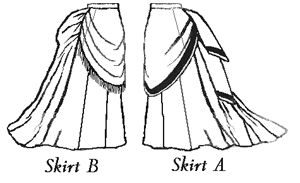 I have made this skirt before too, but I did so in a cheap satin and even though it worked well it didn’t last long (it fell apart).  I know I will need to make some modifications to the pattern like I don’t want the skirt to be that long at the back or that full.  It may end up that I need to purchase the 4 gore pattern but if I can get away with this pattern I think why not.  The plan however is to have the dress a walking length, or at worst a s mall sweep train.  I am going to make the skirt in white and Homespun is likely, that way I can use the same material to trim the polonaise and the skirt so the white matches.  I will also do a double run of full pleated flounces at the bottom (hence to walking length) which will also have a red trim that matches the polonaise. 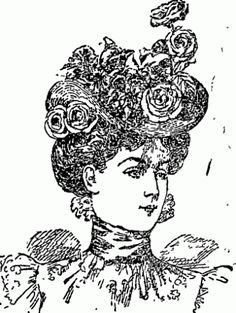 So the final crowning glory on this outfit (pun intended) is to decorate a boater hat in floral and lace/ribbon.  This is going to be something new for me because I am not a milliner but also because I don’t normally finish outfits to that final detail and I guess I really want to see if I can do it.

Anyway that’s the plan, it is going to take a lot of work and attention to detail, I won’t be able to rush this the way I normally do and to be honest I don’t want to.  Wish me luck.