I love this dress, so much so that I am considering making one myself – I do have a plethora of emerald/forest green velveteen to use.  The one thing that holds me back is that it wasn’t the easiest pattern I have ever worked with.  Having said that I learnt a lot. 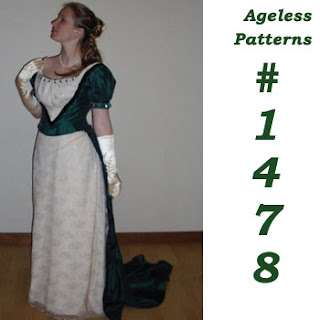 You may be asking why Ange didn’t make her own damn dress.  Well you must remember that this was some years ago and Ange was still my young apprentice at that time.  She certainly helped a lot, and probably could have managed a Truly Victorian pattern without to much issue but this is Ageless Patterns (#1478) and even for me who never really follows pattern instructions it was really hard.  We had much resizing, reshaping, and Ange even suffered a 7 day lemon detox and super tight laced corset in order to get into it.  It was a team effort because truly one person could not have suffered the frustration alone – no matter how beautiful the final product is.

I should explain that people did not have much choice in their Victorian costumes.  I did all the research bought all the patterns and assigned to each person based on what I thought would suit them best.  What they did have a say in was materials because they bought and paid for all of that.  However from the moment I saw this dress in black and white line drawing I just felt it was a deep green dress with cream inserts.  Lucky for me Ange agreed and that was what we went looking for.

She ended up with some sort of man made fabric, like a taffeta but a really cheap one.  From memory it cost about $4/m which was lucky cause that train required a lot of fabric.  The underskirt and front bodice were a cream fabric, something like a crepe I think with a stretch lace overlay.  A stretch lace that still sometime haunts the corners of my worst sewing nightmares.  The bodice was finished off with some hanging beads for some added bling.

Like I said in Part 1 – Ageless patterns are not made to be easy, they have not been resized to adhere to modern figure standards and the instructions are close to non existent.  This dress being simple, at least came with everything I needed to achieve a close to image look without to much sewing training.  In the end we not only resized pieces but also added in another two panels in the centre front.  To give you an idea of how out of modern proportion this pattern is the bust after resizing down/up would fit 36-38 inches whist the waist was 26 inches.  Yes this pattern is made to fit the proportions of a barbie doll.

As I mentioned the stretch lace was a nightmare but did add a certain bling to the final product so it was probably worthwhile in the end though “stretch lace” as a general term was added to the ever growing list of banned material.  At least the scalloped edge meant that I did not have to hem it.  All other material was fine to work with and the bodice pieces were also flatlined with the denim, again this was lucky because it meant that even if Ange didn’t technically fill out the bodice once corseted to the level needed for the waist – she at least looked like she did, since the denim held its shape.

Like I said once complete this was one of my most favourite of the Victorian costumes and I really should give it another go sometime and see if my  resizing ability has improved.