Hef has already told you about her version of the boxy dress here. Well this is my version, technically my post should have been first since I made mine first but, you can’t have everything.

This dress was from a Butterick reproduction pattern 4792. When I first started sewing I purchased it along with a whole bunch of other Butterick reproduction patterns when spotlight was having a half price sale. I liked it because it was retro 50’s, which was the era I was concentrating on, and also really liked the backwards halter of the top. In the drawing it looked like it may be a challenge, but it was also something different, something that made this dress unique to all the other reproduction dresses. 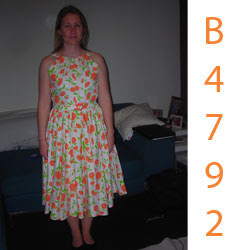 Admittedly this was when I had first started sewing and I didn’t realise the world of actual vintage patterns was waiting for me on etsy, or that there were other patterns out there which would suit me better, but more on that later.

I purchased some awesome orange floral cotton. The orange on it was very vibrant and so I thought it would make a great summer dress. Unfortunately the white of the cotton was not as opaque as I would have liked so I decided to line the dress in white cotton, so as to not have the orange showing through from the self lining the pattern asked for.

To do that I had to slice the bodice pieces which are designed to fold over and line themselves. Although it was a small change it added to the challenge of this dress for a very new sewer and I was amazed when I was able to do it and it all turned out right.

I had seen this dress made up before, and it looked boxy but I thought that was perhaps just how it had turned out that time. Unfortunately it was not just that girl, on my frame it did not hold any shape, and so it was dubbed the box dress. The only shape I could get out of it was if I pulled the belt quite tight, which makes it slightly less boxy but still not the beautiful nipped waist look of the drawing. 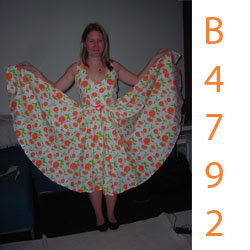 I like the skirt part on it. You can lift it all the way up and it looks like bat wings. It is soooo large! (you will see from the photos of me I like to hold my skirt up and show how large they are, hef likens it to a peacock). I think it’s supposed to have less, or at least is supposed to be gathered in specific spots, but I didn’t do that. I gathered all the way round and it seemed to be ok, like I said I was very new to sewing at this point.

I still like it, but the backwards halter top seems to make my shoulders look really prominent and it does not pull in enough for a waist. I mean I don’t have a waist anyway. 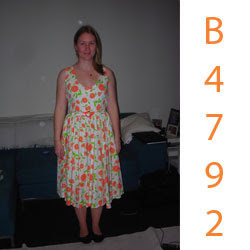 When we were doing the photos for this blog I accidently put it around the wrong way and wow it look sooo much better! The boobs were put into the back which was the only issue, that and well I was wearing a dress backwards. I’m tempted to make it that way for good, but to do that I’d have to do something with the boobs. Take a look at the pictures and let me know your thoughts/ideas. Would turning it backwards permanently make it work or do you have other suggestions on how to save this box dress. 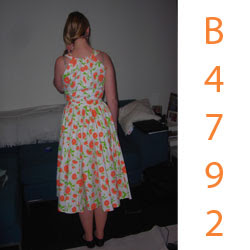