A Look back at my Victorian Past Part 5 – Stacey's Ensemble

This was a nightmare of a costume to make.  Bit of background - these costumes were made for a game at a role-playing convention, yes it has crossed my mind since that it was a lot of work for 3 hours of use but that aside.  In addition to all the Victorian costumes I was also making all these pirate costumes (that were worn for the 4 days). 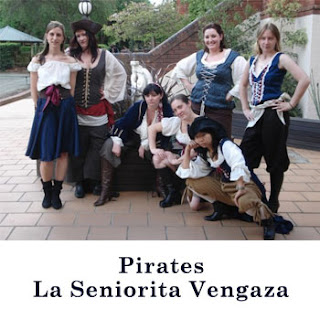 I did get a lot of help from the lovely ladies but I was at the time the primary sewist.  Stacey was the second and so she made her pirate outfit and was also going to make her Victorian.  Pirate went off without a hitch but Victorian was presented to me the afternoon before con, the self drafted underskirt complete and the Wash over skirt mostly complete but the bodice was simply pieces. 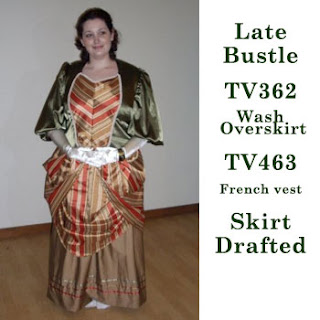 Now remember when I said that TV had the best sizing system ever - well Stacey did not listen to me and had decided she would need the largest pattern size and thus traced and cut that out.  So Yeah, perhaps a post on perception v's reality may be in order some time.  Anyhow we were up until about 4 or 5am getting this completed a task made all the more fun by Stacey's bizarre ability to stab herself with any pin post about 3am to which the sewing hours after that became known as stab o'clock.

I won't break this one down as I did the last ones because as I have already mentioned I didn't sew a lot of it.  From what I can tell the Wash Over skirt sews together well looks great and is easy to deal with in terms of cleaning and storing.  The whole skirt flattens out for ironing and cleaning.  what I will focus on is the bodice.

We changed up the sleeves (to make it easier at stab o'clock) and changed the neckline quite substantially.  I was especially proud of having lined up the chevron despite the resizing stress.  I assume it would have sewn together much better if the proper instructions were followed from the start.  Lucky I had some practice with the whole resize thing on my own bodice so it wasn't completely foreign though I would still only rate myself novice at best.

Anyway there is now only one Victorian to go but alas I will need to get a better picture as the one I have is only from behind.