I have previously spoken about this Butterick Pattern, in the perfect dress post, lamenting the horrid size issues I had with the wiggle version. This version I actually made first and love and it did at the time fit me. The only piece that this style shares with the wiggle is the facing and the fake cross front. I used neither when making this dress and instead reversed the full front piece to make it actually a cross over top. The entire dress was lined (due to the see through nature of voile) so the facing was also ignored. It is by this method of eliminating all wiggle dress pieces that I believe the sizing worked on this one but not the other – or as I like to put it someone in the butterick factory needs to be paying more attention. The two styles are two different sizes and nothing will convince me otherwise.

This dress was made out of a cotton voile with a blue and green floral print and some flocking (which is hard to see in photos). I saw the material (on sale as usual) for about $5 a meter at spotlight and fell in love with the blue and green colouring straight away. It was on a tall bold (150cm) and there was very minimal left (I think about 1.5-2m) but that didn’t stop me I bought it up and coveted the ideas of what outfit it could be turned into. I knew I needed a pattern that was sweet and feminine and not to fancy in its details (least it detract from the gorgeous floral), but it also had to work with such minimal yardage as I had. 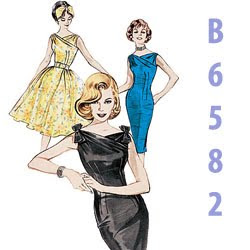 Enter Butterick 6582, which I had bought originally for the wiggle dress on the front in black (so sexy). The full skirted version I noticed used deceptively low yardage and made up for it with some bias cutting in the skirt (I know that sounds odd as Bias cutting normally results in skads of unusable off-cuts but this pattern does not do that as the bias is only slight). It was everything I wanted it to be light, floaty, spring like, with enough detail in the cross front to be interesting but not so much as to be detracting. It answered all the feminine callings that my normally quite masculine brain had dreamt up for this floral. I immediately set to work. 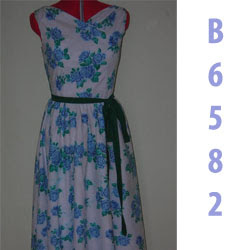 The dress came together relatively easily considering the changes that I had made to it (creating the full cross front) and truth be told the waist did end up a little tighter for the extra bulk but not enough to be a problem and totally worth it to have the full cross front. I lined it in a light white poplin that I had lying around (75m of it lying around to be exact) and hand sewed the waist shut to hide all the internal seams.


I don’t think I did a great job with the zip but I blame that on the fact that I don’t normally use non invisible zips and I don’t think it made to much difference anyway. 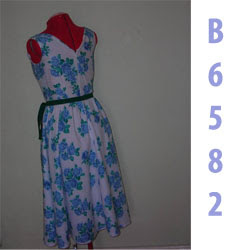 When finished it somehow still looked unfinished, it needed a belt. But I felt that the traditional belt as per the pattern picture would be just a bit too much for this and decided on using left over green poplin to create a thin tie belt to cover the waist seam and give more of a waspie waste illusion.

I think all in all this is one of my favourite finished projects – I even wore it to a friends wedding about a year after it was made. It is still beautiful and waiting around for me to lose about 10kg and fit back into it.
Posted by Angelic Cow at 1:28 PM