Well it has been a very long time since I got on here and did well anything. Long story but basically life got in the way and then there is the complete lack of sewing mojo. I mean sure I have made a few things since I last posted but all in all not much. 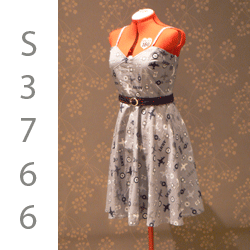 The first I call the army dress. Whilst it is technically a trial and petticoat at that I think it turned out not to bad - I photographed it here with the belt of another dress as I have not yet decided how best to "decorate" it.

I think this has been laying around unfinished for over a year. The final touches were to seal the inside lining of the bodice and to sew in a strap, that was it.

I started this because I had to resize simplicity pattern 3766 which i have in a 30 inch bust (size 12) to fit my then size 16 (36 bust) figure - (by the way these pics are on Mavis my dummy for two reasons, the first is that I had no photographer and the second is that I am now to chunky to fit these UFO's but the did require finishing non the less)

funnily enough I wore this to the engagement party (mostly finished) for a friend who will be getting married next Friday.

In any case the army dress was the trial for the petticoat to the "pretty dress". The pattern to this dress I seem to have misplaced but I am sure I will locate it at some stage. I remember buying it because it was sooooo pretty. I imagined it in a soft white with a lemon petticoat and lemon binding - and so that is what I made. 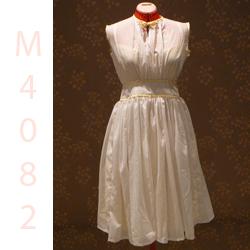 Ange also made a pretty dress - it didn't go so well in either case. The issues I have with it are as follows.

1. I am an idiot - that waist band - doesn't it look odd - well that would be because the bastard is upside down .... this dress never fit because of that - I will it seems have to turn it around but right now I don't have the patience

2. The petty coat despite being cut from the same pattern as the above army dress has a waist that wouldn't fit a 5 year old. I have no idea how I did it only that IT will need to be entirely redone.

Anyway dinner is ready so I best go eat

Happy sewing I should have more up tomorrow.
Posted by Angelic Cow at 7:04 PM