Buttons? Buttons? Who's got the Buttons?

At last count this dress will have over 90 buttons on it.  Most of them cloth covered and only 23 of them functional  These buttons (and the phone replacement issue) account for the delay in these posts.

The plan for the buttons included around 25 functional buttons for the front of the bodice, 20 for the sleeve epaulet detail (10 per sleeve), and 8 skirt epaulets with 7 buttons each for a total of 56 - 101 buttons in total (Plus what will be used on the under sleeves).

I wanted the functional buttons to be about half an inch, smaller for the sleeve detail - but the hardest to find would be the skirt buttons.

Anyway, I went searching for buttons online.  I could have gone to the local spotlight but there cloth covered buttons are expensive at $8 for 10, have crappy plastic backs and the size range isn't as extensive as I would need.

This brought but the next issue in the planning, how to attach the buttons to the skirt and not have them flop about, I wanted them to sit flat.  Shanks on functional buttons are both necessary but also get held into position by the extra material around the button hole.  Without a button hole it flops around which wouldn't work for what I was after.

So I found on ebay a listing that had not only metal backed cloth cover button kits but came in both flat back (for gluing on jewellery apparently) and shanked.  A bit more searching and I found the website I like big Buttons and placed an order.

I decided on the small 12mm (25), for the sleeves, 15mm (25) for the functional buttons, and huge 1.5inch for the skirt (50).  I was able to get shanks only on the functional buttons and flat backs on the rest.  You may have noticed that I had to cut down the plan for the skirt buttons because they came in packs of 50 or 100 and I didn't want 44 unnecessary 1.5inch flat back buttons on my hands.  Seemed easier on the pocket and storage to cut down each epaulet by 1 button and only need 48.

There was only one issue with the delivery which is that one of my shank backs came shankless which cut down the number I had to work with by one.  Otherwise, service was fast, friendly and the website easy to use.  I also found that the smaller button sizes were smaller than I had anticipated.  I think maybe if you flattened out the metal circle it would measure 1.5cm but the front buttons came in more the size I wanted for the sleeves and the sleeves are tiny - but we make do and I don't think it will make too much difference to the final look

Then set about the epic task of covering these bad boys.  The process is long winded enough when you have 5 to do for a dress, 89 (as the final count was) took a long time and patience that I am not well known for.  But I did promise myself that I would spend more time and effort on the finer details of the things I make so  I persevered.

To cover the buttons, first I had to cut the circles out of the fabric - a process made slightly easier by spending the extra buck on the plastic sizing tool which provides an exact template of the size that circle.  Then you stitch a run around the circle, put it in the rubber setting tool, place the metal to cover in pull the stitch tight and then push the back in with the plastic finishing tool.  To make things a bit more secure I added some craft glue between the inside and the back.  Then I did this about 90 times.

Pro tip, the bigger the button the easier it is to get the back in.  For the really small ones I used a vice, for the really big ones my own hand strength was fine.

Once all done I attached the buttons to the bodice front the traditional way (shanked) though I screwed up on spacing and will have to redo them today :(.

For the Skirt Epaulets I sewed through the the fabric where it curls under into the button. 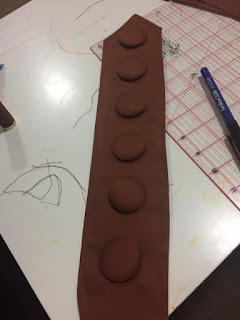 I will provide further details of the process of making the epaulets when I do the post regarding the skirt and the one for the bodice, but for now progress continues and with only a couple of weeks to go I better get back to it.