One of the best things about hoarding tendencies is that I still have much of the stuff I started but never finished.  So this post brings you something old and something new following the completion of the Victorian underwear.  Rather than work chronologically I am going to go from the skin up.

Corset
My new corset arrived.  I have to say I am much impressed for the price, the quality is quite good.  The boning is definitely steel, they even include a little sample card of what is in it to prove to you its authenticity.  Fabric seems strong and though not of highest quality it will do the job for now.  One day I will make my own.  Until then I won't go into too much detail. 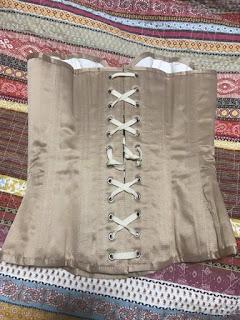 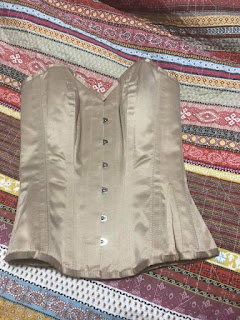 Combination Underwear TV105
I bought the pattern with plans to create these way back but did not get round to it with all the other crazy Victorian stuff going on at the same time.

I planned to make it for my 2017 birthday and even bought all the fabric and trim at the beginning of that year.  I am fairly certain I started almost straight away too, I got almost done and the project shelved for another year.

Finally they were finished about a month ago, just after the high tea.  As they say better late than never.

They are made out of Batiste, I think in a cotton or poly/cotton blend.  Given the wrinkle factor I am willing to believe it 100% cotton.  Given the layering I will be doing in October I hope it is.  Anyway cost wise I think it was about $5-7/m at spotlight.  The colour is officially creame and I loved how the slight colour deviation with the white trim worked (trim was about $1.50/m).

I do love the buttons.  I found them on a random fabric shop outing with my mother and they were cheap as chips, maybe 20c each.

I am unsure and undecided if I wear corset on skin or corset over the underwear.  The pattern calls for you to take corseted measurements but I guess it could go either.

Making it was easier than I had first anticipated.  I did have to unpick the back as I had not been consistent with my crossing overs but that would likely have been avoided had I not taken a year off in between.

The pattern calls for cap sleeves which I omitted in favour of bias sealing the arm scry.  Pro tip the thinner bias tape works better than the wider one.  Who would have thought.

It looks really odd until you add the buttons on too, so remember that you haven't stuffed up thats just how it looks. 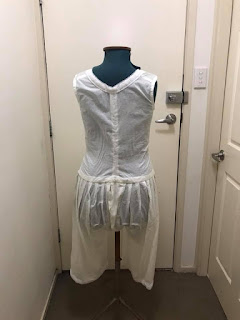 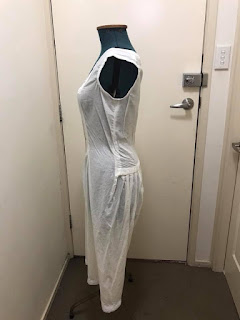 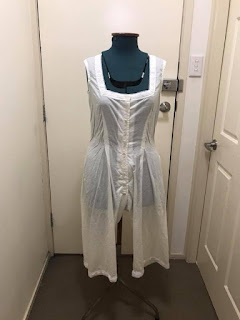 Bustle TV101
Technically this is a remake.  I had made this for a LARP costume years ago but when I went through costumes that had been in storage for a few years that bustle (hastily thrown together in inferior fabric choices and stash finds) had mold on it so I cut the bones back out and bought the fabric to remake.

Fast-forward 2 years and we have the completed bustle.  You may notice a theme of white on off white.  The fabric is a quilting cotton from spotlight which could have been anywhere from $5-10/m I can't remember but likely it was on sale as I rarely pay full price on anything.  I have considered adding extra trim to my ruffles but they seem to work ok on their own.  There is one ruffle missing, I don't have quite enough inches and I am still deciding whether to add it in or not.  In any case I consider this finished and if I choose to jazz it up another time so be it.

Like all TV patterns I have ever worked with it runs together like a dream creating a much more complex looking garment than it really is.  TV makes Victorian easy.  I will warn - reinforce those bustle ties because as previously mentioned one of mine pulled right out of the stitching while getting dressed at the Carrington.  Of cause I have fixed it now. 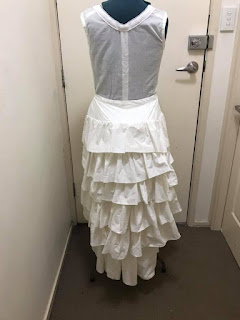 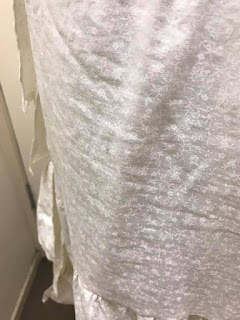 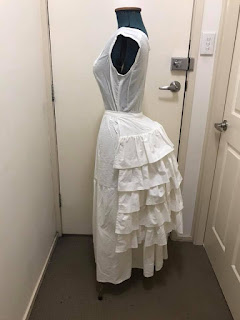 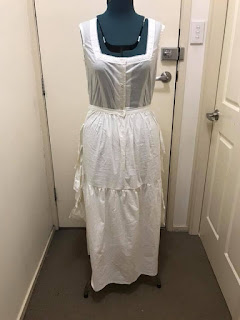 Petticoat TV170
I have now completed all 4 petticoats from a decade ago.  This was the last and only one not complete at the time.  It sat around in a box as pieces for the longest time but since I was now doing this new costume kick it seemed like the perfect opportunity to get it out and finalise.  Only one teeny tiny issue.... what happened to my waistband, and why does nowhere sell lemon poplin anymore.  Ok so the waistband doesn't match but I don't mind too much.

I must have lent this pattern out and have no idea what became of it, which is sad because it is a great pattern.  On the flip side I do have a bustle and natural form petticoat from it so I am unlikely to need another.  Still I hope it turns up. 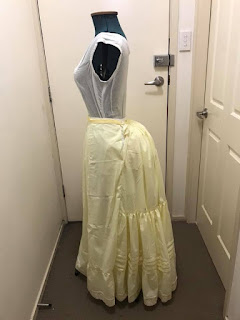 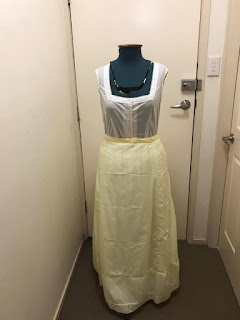 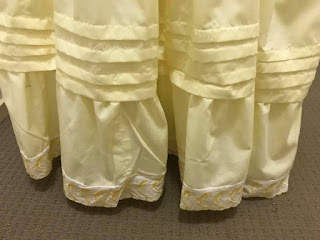 well that is all the unmentionables mentioned.  For more information on them please follow the links provided
Posted by Angelic Cow at 10:12 PM