This is a catch up post - I made these dresses (with help) last Easter for a role playing convention in Sydney.

The basic costume idea was to create a visual of the avengers using a pattern of a 1950's dress.  The pattern chosen, Butterick 5603, is a reprint from I think the early to mid 50's though the butterick website is not being very helpful and I am in no way inclined to leave my bed and check the envelope.  It is universally flattering, with 3 choices of neckline and the easy fit and flare shape.  As you can tell by the picture this was quite important as we are a mutli-shaped bunch.

In terms of the pattern I have no complaints, I had made it previously (which I will cover if only to put up pictures later.)  We ended up using all 3 of the necklines though only I chose the boat-neck.

So to make this quick I will go through each "avenger" and the things done. 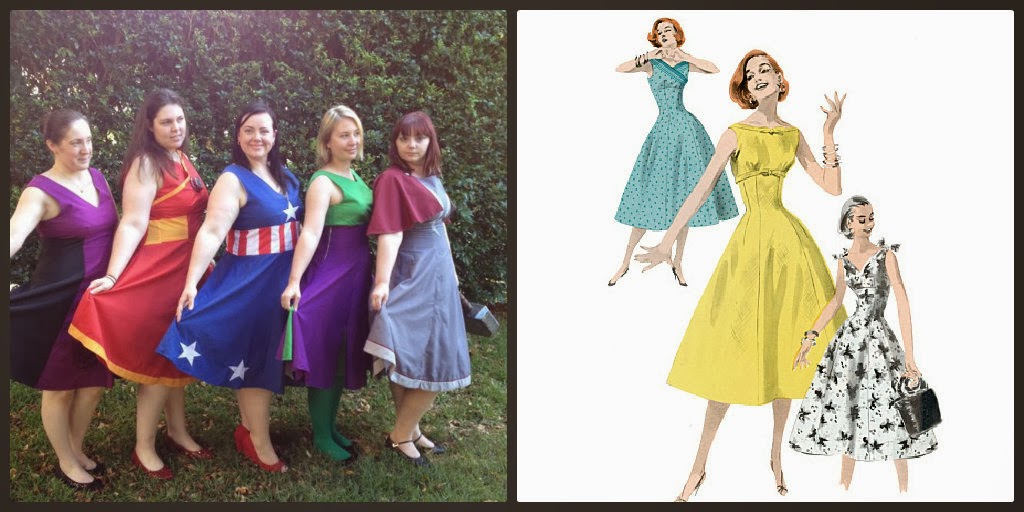 Hawk Eye
This dress was interesting, what the wearer didn't tell me was that she was pregnant and not yet ready to announce so when the first fitting was done it was a little tight on the waistline.  I had to fix it by unpicking from under bust to flare and sew with a 1cm seam allowance at that part.  The dress was done in colour blocking and has a hawkeye symbol on the front.... well most of one - She was responsible for that and she only got the two circles and missed the cross hairs.

Ironman
We used colour blocking on this too a little around the waist and then did bias neckline and the hem.  The wearer borrowed a chest piece to complete the outfit.

Captain America
This one was a doozy - we had to shorten the waistline to fit the wearer and then break it into stripes which then had to be cut in the correct colours and pieced back together again in the right order.  On top of that the stars required no only cutting out but applique to attached them... They go all the way around the hem and there is one on center back and front (the back was a mistake but not a bad one).  Lucky for me I didn't do the applique - Ironman did

Hulk (ange)
Purple and acid green looked awesome together.  This one also has the same crossfront as Ironman.  It is green bodice then purple skirt to which we added green goddets.  In hindsight I think I should have diamond pieced the bodice to the skirt but time was a factor.

Thor (me)
Obviously I have a lot of extra effort for my dress - and lucky for me I had Ironman to do the applique of the front swirls.  I also did a hem of light grey that has a piping of maroon.  Originally the caplet etc was to be red but we found that the bright red just didn't work with the grey so I went and got more maroon.  The caplet comes from a 1940's pattern but I think worked well in this setting.

All of them were made for under $20 using poplin I picked up at $2/m in Cabramatta, sure it isn't the best quality but a costume is a costume and the price was so right.

A big thank you goes out to my girls all pictured for their help and also to my friend Gav for the hammer.
Posted by Angelic Cow at 12:47 AM